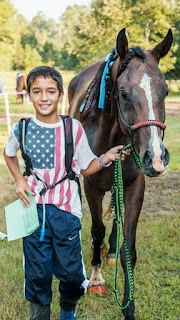 Out of the pod rider, volunteer, crew member Leonardo is fully immersed in The Green Bean Endurance Competition.
Leonardo who is 10 1/2 years old— has been riding since he was young. Started with his mother and progressed to riding his trusty steed Rainy in local CTR events. He expressed an interest in riding endurance with us and often accompanied us to rides to help out.
I head a Green bean group for the youngest Beans called the Greenie Beanies, a team of children who operate out of the Seedling Division of Green Bean Endurance. and he instantly wanted to sign up. The kids  get to earn points for various activities that they participate in. He loves watching his points accumulate as he progresses.
He has been learning a lot, riding with us throughout the summer on a few different horses and has graduated to his mothers mount, Raj. He and Raj attempted a 50 miler at Unicorn Hunt in September. Though his horse passed his first vet check at 25 miles, he decided to RO as Raj wouldn’t eat or drink and he felt that it was not a good idea to head back out. He was a bit upset about it, but knew it was the right thing to do. He monitored his horse making sure he ate and drank and made himself very useful around camp, even rode out late at night with ride management to help with the 100 miler that was still out on trail.
He attempted another 50 being sponsored by an accomplished FEI rider, but they pulled his horse at 40 miles after she suffered a fall. Even after these two non-completions, he is still ready to continue training so that he can try again. He is always willing to help in vet checks, run errands, cart us stuff when we need it, trot horses out for people, or just be silly and make people laugh. He is counting down the days when he can try another 50. He has already had an offer of a horse from a gracious friend, as the two mounts he was planning to ride are on hiatus. I am grateful that many in the endurance community are so willing to step up and help/mentor these juniors.

A Word about Sponsorship