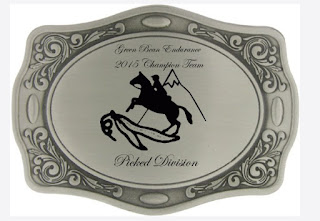 If you are considering putting a TEAM together for 2016 now is the  time to be planning which riders your TEAM will be be comprised of.   There are a couple of ways to go about chasing The Green Bean Endurance Championship.

1.)  Riding with a team composed of people you know and will actually ride the rides with from your own region.  The fun in that is you get face time with your peeps, and you also get to represent your region.  How cool would it be to say that “your” region won the Championship?  It is a good strategy, keeps your team mates motivated,  and nothing like some plotting and planning around a late evening campfire on how you will manage to out ride the other TEAM.

2.)  Riding with a team composed of riders from various regions, who do not ride together but represent motivated riders from various regions who band together for the common cause, The Green Bean Endurance Championship.  This may seem like a sterile way to run a TEAM, not actually rubbing elbows at rides so to speak.  But miles are miles, and points are points at the end of the day.  So if you are an independent sort, and care to band with others who ride like-minded, a mixed regional team might be the way for you to go.

3). When putting together a TEAM you want to communicate honestly with each other about your ride goals.  It is important to be clear on what you expect you can, or cannot do, and be upfront prior to signing on.  The truth is the “luck of the draw” will cause a TEAM member here or there to not pull in many or any points.  Perhaps the horse is injured, or a rider has a life event that pulls them out of commission.  It is just like an endurance ride. You prepare, plan your strategy, and do your best.  I’ve seen the leaders on the scoreboard shift more than a few times this season, and I wouldn’t want to wager a bet on any single TEAM at this point.   A good ride weekend with everybody riding (somewhere) could change everything.

4.) The competition so far this year has been a lot of fun!  Many regions represented in our team-members, and rides represented from east to west.  We’ve had a few blips and bumps along the way, with our cyber relocation being one of them.  But for the most part, it has all ran smoother than we anticipated.    So who will ride in 2016?  Will you renew your TEAM and try again?  Or will you form new TEAMs?   We hope to hear from you at sign up in the FALL for the 2016 ride season.

Congrats Nicole Spencer on your ride at Coyote Ridge!