We continue with Bruce Weary and his gaited horse Major:

” Whoa. Sometimes I think we attract or create lessons to learn ourselves. I don’t think I have ever ridden Major in a heart rate monitor, but I did today. My monitor has been sitting around for a couple of years, so I had new batteries put in and it fired right up. The good news is, standing at the hitching rail, saddled, knowing he is going out, he was at 30 bpm. Which means he may be even a little lower in the corral at rest. Very good. As we left, he picked up to the 80’s and 90’s at a fast walk, and when we got out onto open ground, he quickly went into the 120’s at about 7 mph. I ponied his stable mate with him, and they are like a comedy routine, each wanting to be in front, so that got him a little excited. Then, I turned the stable mate loose and picked up the pace. If we were in front, he was about 125 or so, if the other horse got out in front, Major would try to stay up and would get into the 140’s. Now, without exception, all of my gaited horses have historically shown a pattern of needing about 4 miles, give or take, to get the engine warmed up and become more aerobic, wherein the working pulse will drop back to more reasonable levels. True to form, Major’s dropped in about 4 miles to a 115-125 working heart rate at about 7-9 mph. Then the other horse began to get playful and would canter off a ways, always circling back to us. When he was leaving us, Major would get animated and go to 170-180, dropping down to around 145 or so, but no lower, as he was not convinced his buddy would not leave him again. Which he did. Again and again. Each time, Major’s speed and heart rate picked up, though I held him at about 11 mph. Major is not a natural leader, and though I knew he likes to be with his buddy, I had no idea it caused such an exaggerated change in his pulse rate. Now, he has only been ridden on an endurance ride with his buddy a couple of times, and the rest of the time alone. So here’s what he’s experienced: Either watching my wife Dayna leave us on his faster camping mate, leaving him to struggle emotionally and me to fight to settle him over the next 5-12 miles, or he and I would stay at the trailer and start the ride 10-15 minutes late, to allow all or most of the other horses to leave camp so that we might take the trail on our own terms. Cardinal Rule #1: No matter HOW late you leave the starting line, there is ALWAYS another horse or two who leave later and eventually catch and pass you. smile emoticon
So, even with taking measures to find our own “alone” spot on the trail, invariably we must encounter and deal with other horses and Major’s desire to catch and stay with them, no matter who they are. I have mentioned that Major tends to fade at the end of a ride, and if his heart rates today, under the circumstances I described, are any indication, he is obviously tiring himself more than necessary to get through the ride. Emotion can be very metabolically expensive. So, my wife, who has a very calm 5 year old Arab gelding she is bringing along and legging up, has agreed to let Major and I tag along while we both do our rides at a slower pace that will hopefully keep Major off of psych meds. smile emoticon
I will say, I am even more impressed with how tough Major must be, to have performed as he has, carrying my 230 lbs, with a high completion rate over 600 miles. It will be interesting to see if his performance smooths out and his eating, drinking and recoveries improve when he has the confidence of riding with a buddy all day. He is not a natural leader or super confident, and I think sometimes it is tempting to try to jam a square peg in a round hole, so to speak, when it comes to our horse’s abilities and traits. I want to work with him, not against him, because he sure has a lot of “try.“

Horses Who Fight For the Lead
Source: http://www.equisearch.com/article/eqhorfight10 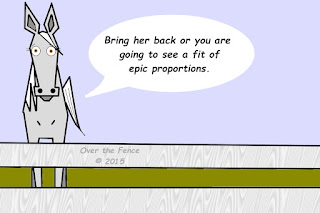 Goal Setting for the Green (and not so)