“Major Update: We are just about fully packed and ready to leave Thursday for the Fire Mountain 50 in Ridgecrest, Ca. It is Major’s turn to go, and Dayna will be riding along with me on her almost 6 year old gelding, Legs. Prep has included new shoes–for Major about 10 days ago, and Legs got his today–wet mashes laced with elytes starting tomorrow continuing through Friday, and just light rides or hand walks the last two weeks. It’s always interesting to see the difference in performance of our horses, especially when ridden side by side. Each pair exhibits a unique set of variables. Legs is young, relatively inexperienced with only two 50’s and an LD under his belt, he carries about 155 lbs on his purebred Arabian back. He also has a quiet mind, doesn’t fret, is a natural leader and is happy to ride alone, eats and drinks very well, and has good heat tolerance. Major, on the other hand, is 10 years old, has been campaigned for about 2 1/2 years, and has over 600 miles carrying 225 lbs on his TWH back. He is not a natural leader, doesn’t eat or drink as he should, will fight to keep up with other horses for security, and has average heat tolerance. I am hoping to help him have a better day by letting him travel with his buddy, and setting our pace based on his working heart rate, as we will both be riding in heart monitors.
Fire Mountain is an established and very well run ride, with lots of up and down grades, and mostly good footing with little rock. The temps will be in the low 60’s, but I will clip Major’s neck and chest to give him optimum cooling. (Side note: According to Courtney Hart, 80% of the horse’s heat loss takes place in the front 1/3rd of his body.) I have changed my feed program with Major, backing off from the higher grain rations (which made him feel like Godzilla but left him a little weak late in the ride) with a real emphasis on fat. He is on Ultium with some Amplify and oil added. He has kept his weight well since his last ride, and it seems like his working heart rate is a little better. His resting rate remains at 28-30.
We are riding for completion, but we want to make the best time we can without using Major up, and focusing on getting him into his “groove” early on so he can relax and spend his energy moving down the trail instead of begin in an excited hurry. Robin, my coach, reviewed with me briefly the relaxation and focusing skills to practice before the start to put him in a good frame of mind. Dayna’s horse is one cool headed dude and will be our anchor for the day. He is really showing a lot of potential with near perfect conformation, sound mind, sure-footed-ness, and straight travel. It will be fun watching him develop. Dayna already has her mind on doing Tevis on him in a couple of years.
That’s about it. Don’t know if I’ll post between now and the start of the ride, but will try to get some updates out during or at least after the ride. Gotta go. I’m burnin’ daylight.”  ~ Bruce Weary 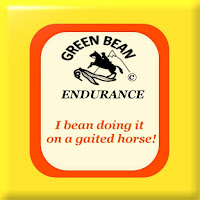 For your reading pleasure